Since it’s Tuesday… here’s a little about Tuesday’s Child before we jump into blurbs and extracts. Adeline was a challenge from the get go as she’s deaf. Which means she won’t hear thunder or rain, or people walking up behind her… or serial killers for that matter. But she does have a cute dog and manages to inflict a rather interesting injury on Nate.

For those who’ve read my later books, and ‘know’ DI Holmes, this is his story. You meet him in the midst of the nasty case he alludes to in the Say a Prayer series, when he’s a DS. 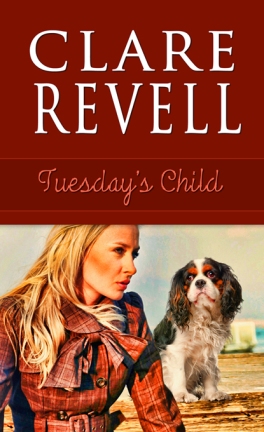 Deaf from the age of five, Adeline Munroe operates a hospital for injured dolls, but lately her quiet life is disturbed by violent, haunting visions. Perhaps it’s just her unspoken fear–a serial killer has struck in Headley Cross. But Adeline soon realizes she’s seeing each murder just before they happen and reluctantly contacts the police.

Detective Sergeant Nate Holmes has enough to deal with between caring for his orphaned niece and his current assignment–the Herbalist killings, so when a woman comes forward who claims to be “seeing” the crimes in dreams, he isn’t hopeful she’ll be of any help. But he knows her from church, and she inexplicably describes how each crime is committed. Is God answering his prayers through Adeline?

Adeline assists the police, yet more women die and she becomes the prime target of the killer. Will Nate crack the case before the Herbalist can complete his agenda–or will the next murder Adeline foresees be her own?

The door flung open letting a blast of wind and rain in with it. Ben jumped up and pushed at Adeline. She acknowledged him by rubbing his ears and then twisted her head to glance over at the door. “Hello.”

A small child stood in the doorway, her coat flapping undone and dripping a puddle onto the floor. A pale blue bobble hat with woolen braids hung off the ear flaps was pulled down snugly over her head. Known as ‘dappy’ hats, they were all the rage.

Adeline even had one hanging on the peg in her hallway.

A doll was clutched in the girl’s hand. Her chest heaved, but otherwise the child stood motionless, her gaze darting around.

I know it’s raining, but a wooly hat in the middle of summer? It’s not as if it’s cold.

“Hello? Can I help you?” Adeline moved around the desk towards her.

“She’s broken.” The child held out the one-armed doll, tears streaking her face. “It said doll hospital…” She turned her head away, and Adeline missed the last half of the sentence.

The child turned back, staring at her, eyes wide with wonder. “For real? You can’t hear anything I say?”

Adeline shook her head. “Nope, but if you look at me when you speak, I can read your lips.”

“But you can talk. I thought deaf people only talked with their hands. They didn’t have voices ’cause they didn’t need them.”

Adeline smiled at her, signing as she spoke. It was refreshing to be with someone who said what they thought instead of hiding their reaction. “I can talk with my hands and my voice. I could hear just like you until I was five. So what did you say?”

“I said the sign said doll hospital, but it doesn’t look like a hospital. There aren’t any beds. And it doesn’t have that funny smell.”

“Well, when you go to the people hospital are there beds in reception?”

The child wiped her nose on her sleeve and hiccoughed through the tears. “No. I guess not.”

“Nor here. What happened to your doll?” Adeline pulled a tissue from the box on the counter and offered it to the sobbing child.

She nodded her head vigorously. “Yeah, he did.”

Really? I thought everyone had a name. Adeline bit her lip, wondering how she could find out. Maybe deal with the doll first and make friends that way.

Detective Sergeant Nate Holmes swung his chair back on two legs and glared at the file in his hand. He flicked it closed and then looked over at his partner, DS Dane Philips. “I hate paper trails. Especially this one.” He tossed the file onto his desk and picked up another one. “It doesn’t matter which way I look at it or how long and hard I pray about it, it’s going nowhere fast. If we had time it wouldn’t matter, but we don’t. Every second he’s still out there, women are at risk.”

Dane peered at him over thick-rimmed reading glasses. “Tell me about it. The victims don’t even have the same eye or hair color. Nor are they in the same age bracket—this guy isn’t choosy. Once we find the link then maybe we’ll get a lead on him.”

“The press is calling him the Herbalist. As the name of every road he’s struck in is named after an herb. He may not be striking in alphabetical order, but so far we’ve had Parsley, Ragwort, and Onion.”

“Herbalist. I guess it’s as good a name as any. It also fits with the plants left on the bodies. It’s interesting he picks the same ones as the roads. He obviously has a strange sense of humor. Either that or he’s sending a weird message.”

Nate laughed as Dane scrawled ‘Herbalist’ over the front of the file. He snatched up the phone as it rang. “DS Holmes.”

“Sgt. Holmes, my name is Adeline Monroe. I run the doll hospital on the High Street.”

The voice was muffled, and Nate struggled to place the accent. He shook his head at the coffee mug Dane waved at him. He put a hand over the phone. “No, thanks, I drink anymore today and I’ll drown.” He lifted his hand again. “How can I help you, Miss Monroe?”

“I have Vianne here with me. She came in about forty minutes ago.”

The chair slammed back onto all four legs, Nate’s attitude changing. His heart pounded. He’d left Vianne with Mrs. Sullivan. What was she doing out on her own? He glanced at the window and the storm raging outside. “Is she all right? She’s not hurt, is she?”

“She has a small scrape on her knee, which I patched up. Other than that she’s fine. Amelia Jane, on the other hand, needs a little more fixing up.”

A tight sigh escaped him as he pinched the bridge of his nose tightly. That wretched doll. How’d she find it? He didn’t need this today. “Have Mrs. Sullivan pick her up—I can give you her number…”

“Apparently Sophie has the measles. Vianne’s been home alone all day.”

“Great. All right I’ll come get her as soon as I can arrange cover here.” Nate tossed the file to the desk.

“I’m more than happy for her to stay here until you finish work. She can sit in main reception and color.”

“All right, thank you. I’ll be there as soon after five as I can.” He flung the receiver down and pushed a hand through his hair. “That’s all I need.”

“Sophie’s sick, so Vianne has evidently been home alone all day. She somehow managed to get that wretched doll off the top of the wardrobe and broke it. She took it to the doll hospital on the High Street.”

“I know it well, mate. That’s where Jasmine works.”

Dane nodded. “We’ve been friends with Adeline for years. She’s deaf, but that never held her back.”

Nate looked at the phone. “Deaf? I just spoke with her on the phone.”

“She has a phone that goes through an operator. She talks, you reply, and she gets it as a text message. It’s a really clever system.”

“Hey, don’t knock it until you’ve tried it.”

Adeline faced Nate and Dane across her desk. Now she had to repeat her story officially, it sounded even more ridiculous than the first time, and she doubted herself.

Nate pulled out his notebook as Dane laid the paperwork on her desk.

“Just take your time,” Nate said. “Tell us everything you remember.”

“It’s not much,” she said. “And it does sound rather far-fetched.”

“That doesn’t matter,” Dane told her. “If what Nate said is accurate, you know things that we never released to the press. Any little detail you can give us could be important.”

“Yes, we do. But you volunteered this information, you came to us. Now, however silly your story sounds and however much the Guv laughs at us for taking your statement, that’s what we’re going to do. Because right now, we need all the help we can get.”

Nate winked at her. “We arrest you for wasting police time.”

“He’s kidding,” Dane said quickly. “He’s got an appalling sense of humor. Please, tell us what you know.”

“All right.” As she spoke, she watched the men’s hands fly over the paper. Dane’s handwriting was large and flowing, whereas Nate’s was neat and precise. Both seemed to fit their personalities.

Dane removed his glasses and chewed the arm thoughtfully, before waving them at her. “Did you ever see him?”

“Him? Oh you mean the attacker? It’s more of a presence than anything else. Like a shadow. He’s there, watching them. It’s hard to put into—” Adeline broke off.

She shivered as a sudden chill permeated her whole being from her soul outwards. She closed her eyes, fighting the urge to throw up, as the hauntingly familiar red sheen enveloped her.

“No…” she managed, pushing to her feet. Maybe if she moved, she could outrun the vision this time. Everything faded until she was no longer aware of the desk beneath her fingertips.

Long black hair swung in front of her face as she ran, her breath coming in gasps. She tripped and fell. Landing on her hands and knees by the river, blood oozing from the grazes, strong hands turned her over before grasping her neck, squeezing the life from her, his face hidden, as a long, greasy ponytail brushed against her face…

Adeline’s hands rose to her throat, trying to pull him away from her. She struggled to breathe, to cry out, to do something, anything. A hand touched her face and her eyelids sprang open. She was lying on her back the floor, her hands outstretched in front of her.

Nate knelt beside her, concern written over his face, his lips moving.

She strained to focus on him, still feeling too choked to speak.

Tears filled her eyes and spilled down her cheeks. Please, God, help her. Don’t let her suffer. She signed frantically telling them to go and help the girl before she died, too.

She watched the two men exchange a few words she couldn’t catch before Dane left the room rapidly. Too late she remembered neither of them spoke sign language and speech was still beyond her. Perhaps Dane had gone for Jasmine.

She tried to focus on him, but all she could see was the figure on the ground and dark eyes. Black, hollow eyes filled with evil boring into her.

Nate’s lips moved, but she couldn’t understand anything he said. She pulled away from him, signing rapidly. “I don’t understand. You have to go and help her, please. He’s hurting her.”